I was shot in the head on April 23, 2017.  It was my parents 20th wedding anniversary, I was sitting in my car, parked up against a wall, wall at the end of a cul-de-sac, and I saw these five sixteen year old kids hopped this wall and came running in my direction.  I did not think anything about it, I thought they were playing hide and seek or just having  just having fun until they surrounded my car vehicle and opened fire.  The gunman on my drivers side door was on a carjacking spree and he shot shot out my drivers side window, I ducked, and when the shooter opened up my car door, and saw that I was still alive he put the gun to my head, pulled the trigger, causing the bullet to enter the left side of my head and project out the right side of my skull.  As a result of being shot in the head I result of being shot in the head I was in a coma for fifteen days, had brain surgery, seven blood transfusions, and I was given a 5% chance of survival.  In addition to my low risk of surviving, my family was told that if I survive I would be in an unresponsive state for the rest of my life.  With that said, when I did come out of the coma I was paralyzed from the neck down, my intestines were frozen so I could not have any bowel movements, I could not feed myself, I did not know what left or right was, I did not know anything, I was basically a living corpse on a deathbed.  So, one day my medical team came into my hospital room, brain surgeons, doctors, physical and occupational therapists, everybody, came into my hospital room and told me, “Nolan, you are never going to walk again.  Our plan for you is get your wrist moving so that you can operate a high powered wheelchair.”  At that moment I thought about everything that I want to do in life; run a marathon, walk across the stage when I graduate college, and the third thing that I want to do is get out of a wheelchair and put this part of my life behind me.  So I looked at the medical team, and yelled, “Get the fuck out of here, I’m going to run a marathon!”  As all of the medical staff scampered out of the room the last doctor turned to me and said, “And Nolan, I believe in you.” 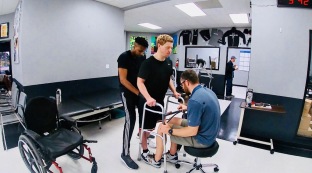 I worked very hard for the next two years, fighting for what I wanted, and I was told by every medical practitioner that I would never walk again and nobody wanted me to practice standing, they even had my parents convinced.  However, everyday I practiced standing, knowing that I could walk again if I believed in myself and continued to practice.  So one day I was in the gym, it was the first day that I learned how to army crawl, actually, and this guy, who I never saw in my life, came up to me and said, “ Do you mind if I make you a GoFundMe and get you into a walking clinic?” Within  two months my social media followers contributed enough money for me to go to a place called NextStep fitness.  At this facility the staff asked me what my goals are and with their help, as the way that I envisioned when I fired my medical staff.  With that said, this is a documentary of my recovery, I hope to inspire others.  With that said, if you are interested in following my journey, consider subscribing to my blog.