The other day I thought about recording a day in the life video that entailed my everyday routine of going through therapy, daily living routine, and start vlogging my recovery after I was robbed at gunpoint and shot in the head.  I had spent a great deal of time imagining exactly how I thought my video would look like, what I needed to accomplish my vision, and did an intensive research study of how to achieve the desired outcome that I was looking for.  When I found that the video camera that I wanted was $1,200 I was reluctant about purchasing it however, I felt such a desire and feeling that everything will workout for the better if I took the financial hit and make the purchase.  Additionally, as I was making the purchase I was already planning in great detail about how I will seek reimbursement and recoup the $1,200 that I spent on this video camera.  Above all however,  was thinking in great detain the great work that I was going to do with my new camera and my intent behind my purchase.  With that said, after my video camera arrived I had spent the next week learning how to use it, fine tuning the shotgun mic, and finding the perfect picture profile to record my project in.  Finally,  everything was set up to start recording my day in the life video and I was prepared to start recording the next morning when I woke up.  So, the next day I woke up, started working hard, had my entire day in the life video recorded so far, and after about an hour into the video I received an email from a physical therapy center, who saw my footage on Instagram, that said, “Hope you are well. Great posts btw! Would you be up for doing a day in the life in quarantine video? You could just film on your iPhone then I could edit it. Nothing fancy but something to share on social media. You story, your daily routine, what you are doing to exercise?”  I agreed and mad the video, however, the law of attraction and it’s powers to manifest your strongest desires did not stop there.  During the filming of my day in the life video President Trump announced that he was issuing to have $1,200 sent out to every American as part of the Coronavirus economic stimulus package.  This just goes to show you the power of intent, it’s role in the law of attraction, and manifestation.  Below is a screenshot of the email that I received and I will post the ‘Day in the Life’ video when it is completed…..  My second manifestation story is down below as well. 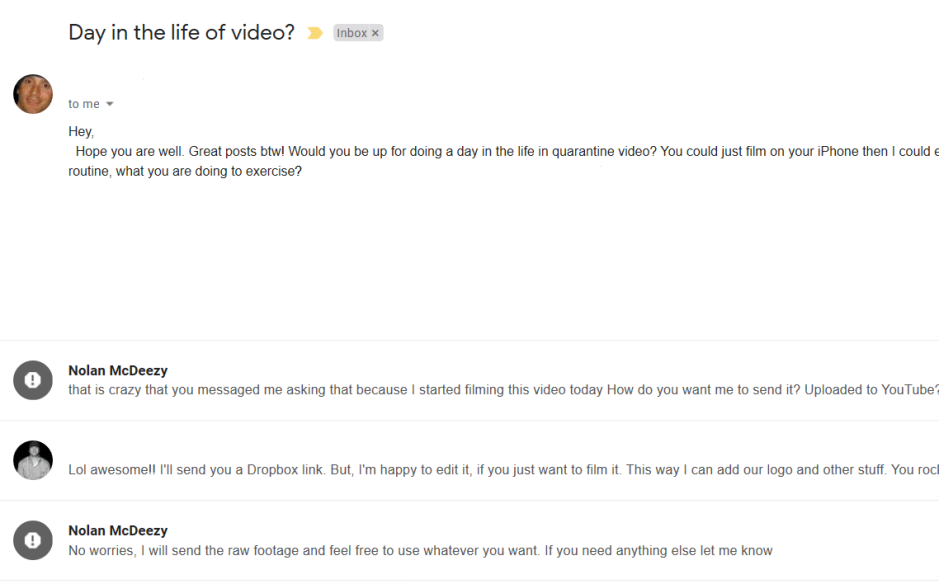 Paulo Cohello said, “When you want something all the universe conspires in helping you achieve it.”   I say this because my roommate in the hospital and I were speaking on the topic of manifesting things from mere thoughts into positive outcomes.  We were joking about harvesting this power of manifestation.  We went onto the topic of cinnamon and we spoke about cinnamon  and about how cinnamon is made.  I took it one step further about how much I love cinnamon and what cinnamon.  I began to question where cinnamon came from.  How was cinnamon discovered?  How did indigenous natives come across cinnamon?  Bottom line is, I wanted cinnamon.  The next morning I could not believe it.  When the hospital staff brought in our breakfast tray my roommate said, “Dude, open your breakfast tray.”  When I opened my breakfast tray, I couldn’t believe what I saw.  It was a cinnamon roll and cinnamon toast.  For lunch that day may be a coincidence when I opened my  lunch tray  all of my wants came true.   Lunch was a cinnamon glaze ham with cinnamon sauce on the side or like Paulo Cohello suggests, there may be a correlation between us and manifesting our desires.