Hello, my name is Nolan McDonnell and this is where my journey began.

I do not remember the night that changed my life. 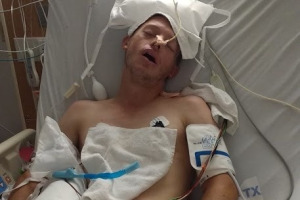 I do not recall two passengers getting into the back seat of my car. I cannot remember where I was meant to be taking them. I cannot fathom how far along that journey we got. I could not tell you whether I mistook the first shot for the backfire of a car. I cannot imagine the look on my face, or the words that were exchanged at the time of the shooting, if any, and I do not remember what they looked or sounded like. I can’t hear what that shouted at me in my mind. I have no idea how I responded. Luckily, I cannot relive the feeling of the bullet entering my skull and exiting on the other side. All I can remember vividly is the face of a hairy man in a fresh labcoat screaming, “Nolan, do you know what happened? You were shot in the head.”

If you were to ask me, before I literally got my brains blown out, what the most important day of life was I would have mentioned how I was supposed to graduate from a junior college in two months or when I received my real estate licence in the mail, I never would have expected to say my parents 20th wedding anniversary, the night when I was sitting in my car, robbed at gunpoint, and shot in the head. Unfortunately, the only accounts I have of the most important day of my life come from a series of police reports and witness statements. I quite literally have to live the moment through the eyes of others. Witnesses claim that I was driving through a residential neighborhood when the first bullets were fired. The entire ambush only lasted a minute or so from start to finish, with the five sixteen-year-old assailants jumped over a wall eventually fleeing on foot, and stashing the would be murder weapon in a nearby bush. The two passengers in the back of the car, fortunately unharmed, immediately got out and ran to nearby houses in seek of assistance. 911 was called and, despite the bullet carving through from the left side of my skull to the right, my life was saved.

Shortly after the incident, I drifted into a drug induced coma. While many will assume that the shooting itself was the most important moment in my life, it was in fact this period of nothingness that followed. Many people recall different accounts of what living within a coma is like. For me, it was a spiritual experience in which I envisioned myself as a fully-recovered man. I pictured every single person that I had to meet along the way to achieve this goal, with my mind running in reverse until I eventually found myself back in the hospital. That was when I finally woke up.

From the first moment that I opened my eyes, I felt like the life I had been leading before was not living at all and I felt as if I had been reborn. It was abhorrently clear that I should not have survived such an ordeal, so every second onwards was like living a miracle; a miracle that I intended not to waste. I had been on life support with a 5% chance of surviving, yet my body held on for dear life. I was now faced with two options, prepare to live out a life of suffering, or suffer to live out a life of healing. In my mind, my chances of recovery did not lie in the hands of doctors and rehabilitation workers, but with me. It was my attitude and approach to new challenges that would dictate how I recovered from my injuries, both physically and mentally.

My starting point was low. The lowest I had ever been, and my life has been plagued with low points. While it was a miracle that I had regained consciousness at all, I had done so in a sorry state. I found myself lying in a pool of sweat as my internal thermostat had been destroyed by the gunshot. I was paralyzed from the neck down, including my intestines, which made it impossible to have any bowel movements, scratch the itching parts of my body, press the call button to get a nurse into my hospital room, and I lacked the ability to drink anything in order to maintain hydration. In fact, I had to suck on a wet sponge for a month to keep my mouth moist, which only made my mouth more parched. I was in so much excruciating pain that they put me on around the clock medicine, a regimen of 22 different medications, to be exact. Unfortunately, even with a steady supply of tablets, the main remained so great that I prayed for the bliss relief of death.

It took a long time for me to summon the courage to want to get better. However, once I realized that attitude is the foundation of our existence and human beings have the ability to what we think about most, it was like a switch had flicked. If I thought of myself as fully covered, focused on all the positive aspects of a negative circumstance, and found meaning in the suffering then I would live a purposeful life. Not only that, but I would attract the necessary people who would help me to reach my goal, learning how to walk again.

“There is never such thing as a hopeless situation as long as you never lose hope in yourself.”

Shortly after I had this mental, spiritual, and emotional epiphany, my medical team informed me that I would never walk again. Mere minutes after setting my biggest goal in life, I had been told that it was an impossibility. However, instead of rolling over and falling into a pit of despair and depression, I responded with anger and passion. I shouted and screamed at the doctors, telling them to fuck out of my hospital room.  I made it clear that no one was going to tell me what I could not achieve with my own mind and body. No one was going to stop me from reaching my goal.  While I was not angry at the doctors themselves and remained eternally grateful for their work, I needed this fire to be lit within me.

Determined that I would have to start this journey without the hospital, I took the decision to fire my medical team and began an aggressive process to discharge myself from the hospital. Of course, this took some doing considering the fact that I had been on my deathbed just one week prior. My older brother, Kenny, found the very best nursing facility in my hometown of San Jose where I could start my recovery process, Almaden Health and Rehab.

This was where my journey would truly begin. 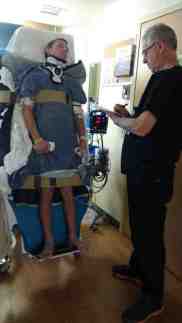 2 thoughts on “When I was Shot in the Head”